It's no secret that music fans represent a passionate audience that brands want to inspire. Toyota has long recognized this, aligning its brand with numerous concerts around the world. Working with Verizon Media, Toyota knew it could engage millennial music fans who are in-market for a car by delivering the music content they crave in a powerful new digital experience.

Toyota understands that music can transform the way people experience life and that many drivers use their vehicles to enjoy music. To boost brand engagement and consideration for Toyota vehicles among a younger audience, the company set its sights on millennial music fans with an interest in major festivals across Verizon Media's properties. In fact, Verizon Media reaches over 90% of U.S. millennials.* Plus, after a successful campaign in 2016 on Yahoo Entertainment, Toyota wanted to step up its efforts to drive even bigger results in 2017.

"Toyota was excited to partner with Verizon Media in 2017 to bring stunning live performances from world-renowned musical artists at several celebrated festivals to fans who weren't able to attend in person but still wanted that immersive experience. Toyota has seen increases in views, unique users and engagement compared to our campaign in 2016," said Nancy Inouye, National Media Manager for Toyota Motor North America. 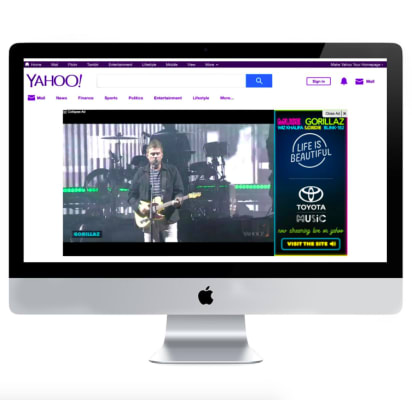 Putting Together the Playlist

Toyota partnered with Verizon Media to give fans a way to experience four top music festivals in the U.S., using the screens they had on hand to tune in. Video is a big part of Toyota's marketing mix and mobile can carry a huge impact, particularly among millennials. As a result, it was crucial that the festival live streams be available on mobile and tablet devices, not just on desktops.

The four live-streamed events, including Firefly, Panorama, Life is Beautiful, and Voodoo, appeared on Yahoo Entertainment and through a custom built billboard ad on the Yahoo homepage. Video, native and display ads ran across Verizon Media websites to promote Toyota vehicles and the live streams. Verizon Media's data and insights helped Toyota to specifically target millennials who were in the market for a new car with relevant ads. 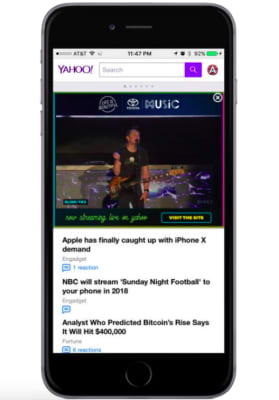 It's All About the Journey

So, how was the fan response? Video views for the music festival live streams grew a whopping 107% compared to 2016, with 83 million views in 2017. Among adults 18-24 in the market to buy a car, there was a 23% lift in consideration to buy a Toyota. What's more, fans were heavily engaged with the content; average tune-in time was 15 minutes, which was a 26% increase from 2016. Perhaps most telling of just how much mobile usage is growing, an increased focus on mobile this year also led to a 7-fold increase in average time spent on mobile.