Why brands should care about esports

The competitive gaming and game streaming markets have been booming over the past 3-4 years, tripling market revenue. This naturally poses an amazing opportunity for brands and advertisers alike, but it may be difficult to understand how to engage with this growing audience. Apart from my interest from a strategic and marketing point of view, I must admit that I have a large personal interest within the field.

It all may have started out with watching my brother spend hours on gaming in the early 90s, but playing games with competitive aspects really grew on me in my twenties to the point where I would continuously work to improve my rank, scores and achievements within games such as Diablo 3, League of Legends and PUBG. With family and work, I will never become a professional player, but that’s fine because I’m still enjoying myself immensely.

It may be difficult to understand why esports and game streaming, in general, is seeing such a massive increase in attention. Quite simply, it is because it is a recognised sport and a form of pop culture entertainment. While some may disagree with that statement, arguing for example that “it doesn’t require physical skills”, they have probably never experienced the requirements of competitive games.

Some games require military-like, tactical collaboration between players or extreme reaction time and precision as an individual. Others require decision making within a fraction of a second. One of the fastest StarCraft II players, a game considered South Korea’s unofficial national sport, tops around 300 effective actions per minute – the average person can type about 40 words per minute, not requiring any comparable decision making.

In addition to the competitive nature of games and the impressive skills the professional players showcase, a lot of them have become great content creators. They are in touch with their audience, have their own specific tone of voice and type of content, and are generally speaking more engaged with their audience compared to regular sports stars.

Consider this: How likely would it be, that you would ask Ronaldo about his choice of playstyle or shoes? If the scenario disappoints you, jump onto Twitch.tv and ask your favourite streamer about his weapon of choice or decision making and there’s a very real chance he will happily answer and even teach you a few things for your own games. 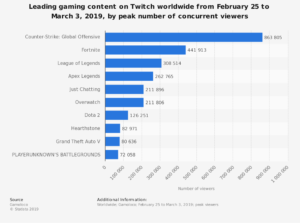 Luckily, esports and game viewing has moved from a nerdy niche to mainstream entertainment. A lot of people are consuming video game content on a daily basis. In just an average week more than 100 million hours of video content are watched among the top 5 games on Twitch.

During the Worlds 2018 Grand Final in League of Legends, a new bar was set in the history of esports — more than 200 million spectators were watching at the same time according to ECS. Compare that to Superbowl 2019, which according to a Nielsen study, had an average televised audience of around 98.2 million viewers. CBS said the big game was watched across all platforms — including digital and streaming — by a combined total of 100.7 million viewers. 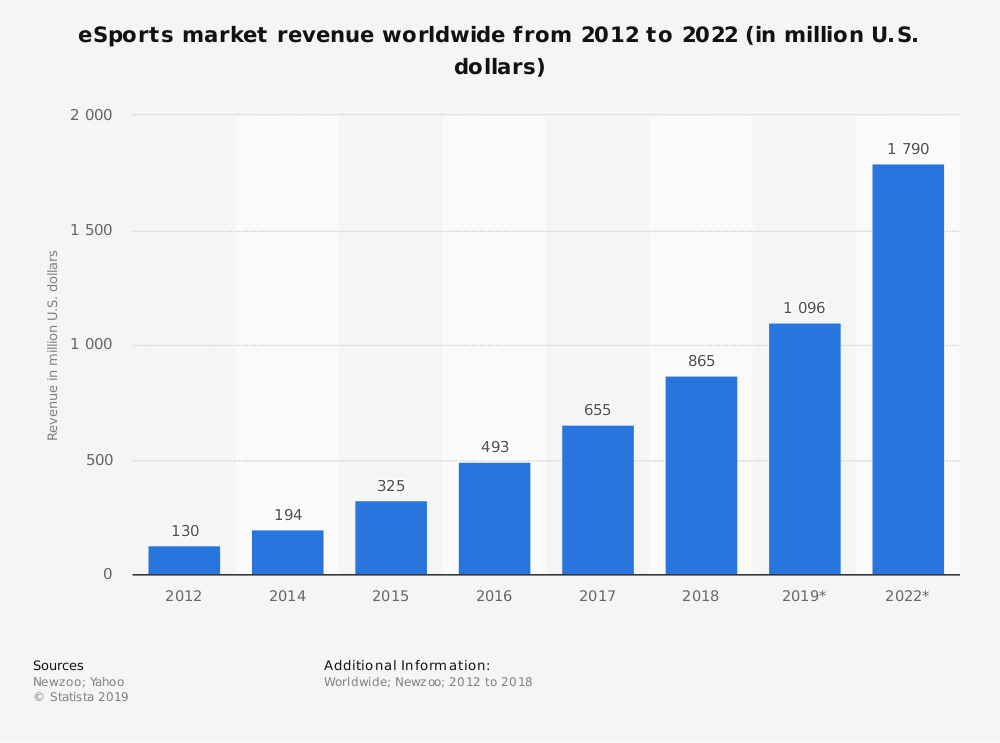 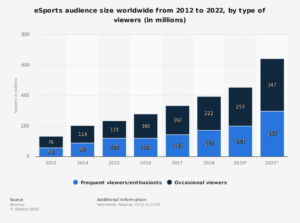 The enthusiasts are spread across the world, but the Asia Pacific region is a particular hotspot for esports. In the United States, some 9.2 percent of internet users in 2019 watched esports, by 2023, an estimated 15.5 percent of internet users will be watching esports at least once per month – which makes perfect sense considering that two-thirds of US citizens are now actively playing games in some form. 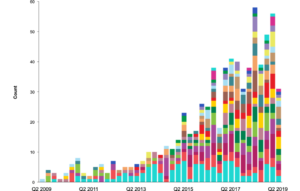 With this amount of viewership, it is no surprise that a large number of private investments into the industry is taking place. Using Quid to track investment frequency in esports and competitive gaming, I found more than a five doubling over the past four years. Virtual and augmented reality is one of the more recent areas to see a boom in investments, but it is nowhere near the amount which mobile games, streaming and esports have seen.

On top of this, prize money is naturally following the interest and increasingly large sums are won in tournaments. One example of this is the eighth annual DOTA 2 world championship which had a combined prize pool of over 25.5 million U.S. dollars, largely supported by the players themselves.

While the industry has seen impressive growth and attention over the past couple of years, I personally believe commercial use of esports and game streaming is still in its infancy.

Current solutions seem to widely adopt efforts from the regular sports world, using sponsorships and video ads in stream breaks, but that could quickly ring hollow to an otherwise ad-averse, digital adept audience. It is also crucial to remember that the majority of content is consumed live and that gaming, and game content consumption, are highly immersive experiences that are hard to break up with intrusive advertising.

Possible solutions that cater to both advertisers and audience could range from close influencer collaborations to in-game dynamic ads, but capitalising on this new media channel does require innovation and effort to understand the communities, rather than just pushing ads into any available communication space.

There’s no doubt the attention is rapidly increasing, the investments are growing and there is a major potential for revenue and brand recognition, but in order to successfully utilize this opportunity, communication relevance should be a key consideration. My hopes as a strategist and gamer are for more creative and non-intrusive advertising solutions that pay homage to the gaming communities out there.

Note: These are my personal observations around esports, gaming and advertising and do not represent a Verizon Media standpoint.