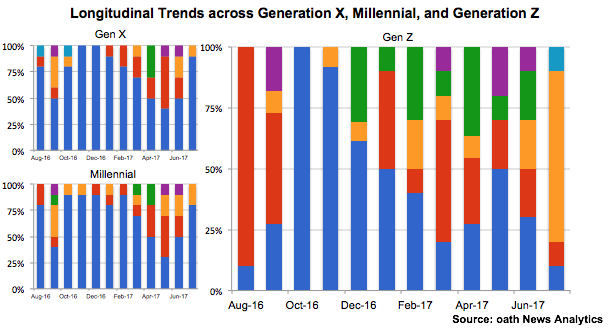 The common assumption is that anyone engaged in current events today is focused on U.S. politics, but the data shows that it actually depends on your generation. Gen Z is focused on a diverse array of issues and are largely isolated from the obsessive focus on national politics seen in other generations. Since they are the next generation to come online as voters (beginning in 2018 for the oldest Gen Zers), should we be concerned for the next election?

Oath News data on longitudinal trends across Gen X, Millennials and Gen Z show that while the November 8th presidential election drew people from all age groups on presidential topics, trends for Gen X and Millennial are also similar. Gen Z has the most diverse interest over time and was the only group with significant discussion in international politics and society related stories.

The US elections, Brexit, France's landmark presidential election, and the unfortunate terrorist attacks over the past year prompted us to dig deeper into our news platform, to see how these events may have impacted our communities. This analysis was conducted through a review of over 100 million comments, of which 3 million were analyzed to define the top 10 trending US hosted articles per month ranked by total comments.

Included in this analysis were comments generated within the flagship mobile app Newsroom iOS and Android, and across our biggest news platforms Yahoo.com and Yahoo News. In future series, we will expand our research to the HuffPost audience, and more.

Hottest Topics and The Election Exception

In July 2016, Donald Trump becomes the presidential nomination from the Republican Party and Hillary Clinton the Democratic Party's nomination. From August 2016 through July 2017, we categorized the most popular stories (as defined by stories with the most comments this past year) as Presidential at 74%, Other Politics at 17%, Crime at 4%, Terrorism at 3%, Society at 2%, and Disaster at 1%. 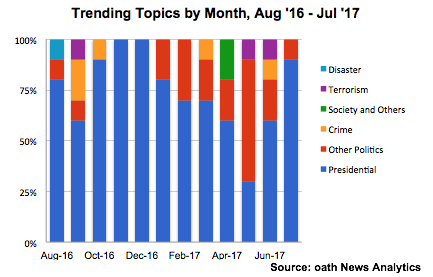 Society: "Teen Girls Arrested After Video of Assault on Man, 62, Appears on Facebook"

Cohort analysis is a useful method to look for patterns by grouping data using a point in time and a characteristic of users. We sliced the data into five distinct groups:

While Gen X is reading stories about Presidential news, Gen Z and Millennials are more inclined to read stories involving other politics (i.e. international conflict), crime, disaster and societal news. Notice the generational similarities among Elder and Baby Boomer, versus Gen X and Millennial. Gen Z is clearly unique and shows the highest diversity in topics discussed - less than 50% of are presidential, substituted with an increase in crime, society, and terrorism news topics. Discussions in presidential topics also decreases in each successive generation whereas discussions in crime and society topics increases.